A tablet app to support communications between home care workers 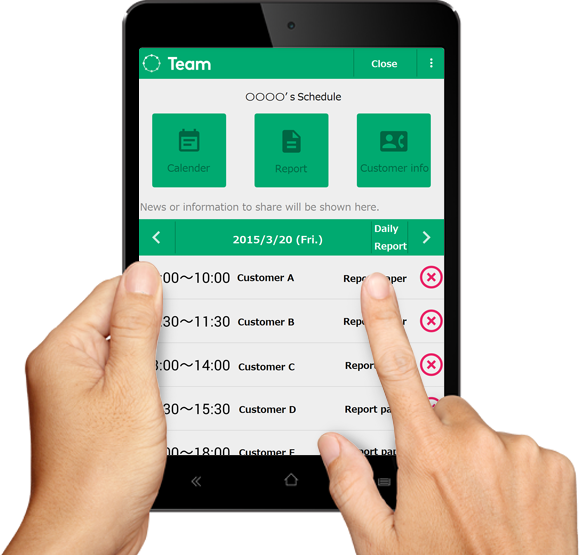 "Kaigo" is a smartphone/table app designed to improve the efficiency and minimized duplicated clerical work. This could be achieved as a result of replacing the task of recording on paper with apps installed in the tablet operations.
Kaigo not only enables the link of information with the office, but it also connects the information with local professional such as doctors and care managers.
According to the "regulation reform/industry creation verification project in fields related to medical treatment and care (survey instrumental to improved and stabler management by care/nursing operators by means of IT utilization, etc.)" Kaigo was formed under the initiative of the Japanese Ministry of Economy, Trade and Industry (METI) in 2011, with focus on local inclusive care systems and the systematic implementation of 24-hour fixed-rate home care. A specific designed home care/nursing app is the center of this solution, recognized for improving the efficiency of care workers/nurses and those in charge of providing services as a result of tablet terminals used to leave behind a detailed record of services implemented whenever needed.

Kaigo is compatible with AndroidOS tablet PCs. However, the recommendation is for the 5.5 to 7" models, as they can be held single-handedly by women workers, recommendable in consider the working behavior of these professionals.
Support for iOS: coming in 2016. 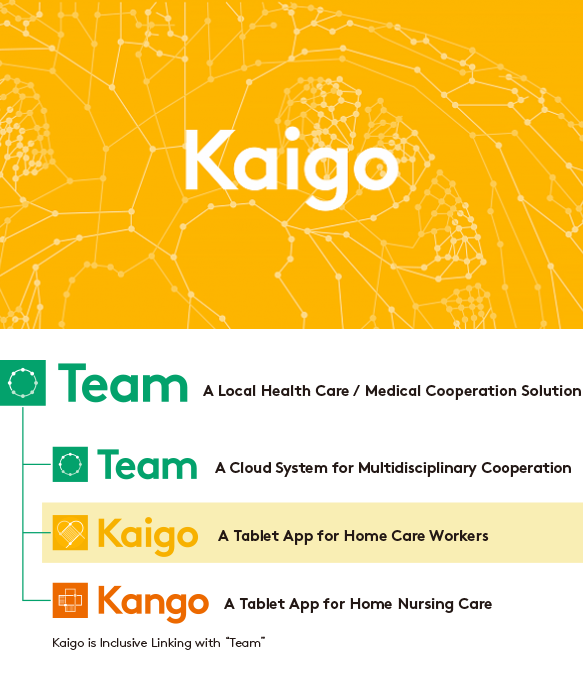 Care Workers can take the advantage of this app to improve the efficiency of preparing daily working reports, resulting in the lighten of the load in shift management, billing and payment work at service providers. User information which comprises several hundreds of files can be extracted anywhere and anytime on a single tablet. Also, since such reports of home visits are now documented as data in the cloud server, information can now be shared in real time, preventing missing reports and optimizing the sharing process, resulting in the improvement of the quality of given care. This is a great handover scenario for Home care system. Just like record sheets, results can be recorded using check marks. So easy that even the ones who dislike IT would be able to use without stress. 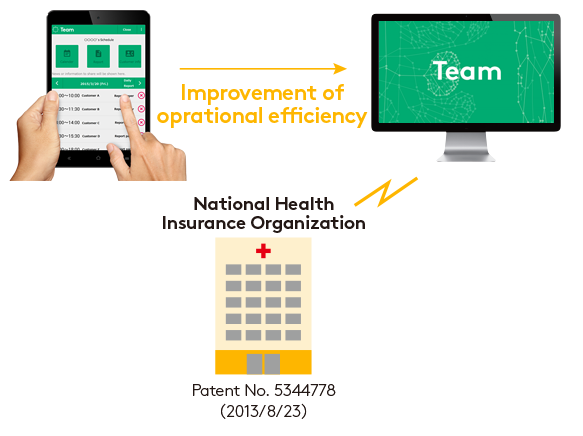 Advantages of Installing the App

2. Improved Motivation and Quality of Services 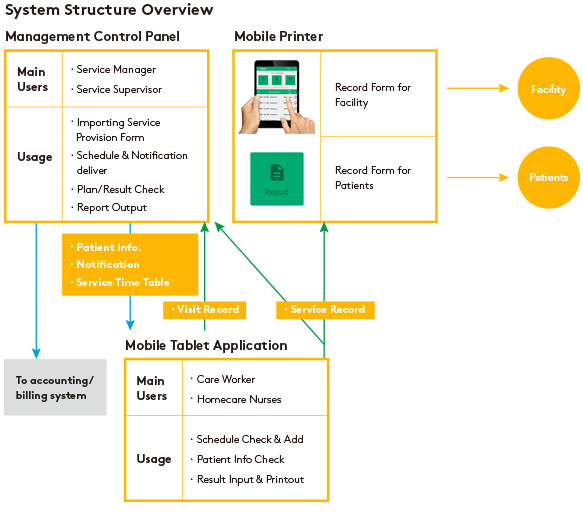 The Social Welfare Corporation Nagaoka, Old People's General Care Center, Kobushi-en
After started using Allm’s home care app, the work of the various care workers and those in charge of services has been considerably approved. Up till now, people had to do the same thing over and over again - fill in results in record sheets and transfer these to daily reports and home care notebooks, which placed a large burden on helpers. Since this app became available, results entered at destinations outside are shared as they are as data with headquarters. As a result, there is no longer the need to transfer details, which lightens the load and makes clerical duties more efficient. Also, since past reports and messages and current user information can be confirmed right away, they feel that information is now shared more reliably and that the quality of services for users has improved.

Kohoen Social Community Service
The app was installed for the purpose of documenting information as data. As a result of using this app, the data obtained from home care records is proving very useful in information analysis. Since reports and messages can be confirmed in chronological order, this proves handy also in ascertaining the circumstances with each user which also helps to prevent omissions in sharing of information among helpers. Also, there was also a major advantage for staff performing clerical work at headquarters. Since differences between scheduled details and results can be simply checked in the system, there is no longer the need to reference various paper documents, and clerical work at the end and beginning of the month can now be performed more efficiently. This has decreased overtime for almost all staff and also solved labor management problems.